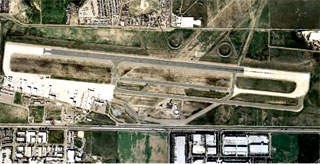 Brown Field Municipal Airport is located in the Otay Mesa neighborhood of San Diego, California, 13 miles (21 km) southeast of Downtown San Diego and named in honor of Commander Melville S. Brown, USN, who was killed in an airplane crash in 1936. Its primary runway is 7,972 feet (2,430 m) long. Its FAA/IATA airport code of SDM probably comes from "San Diego Municipal". Formerly Naval Auxiliary Air Station Brown Field, it is now a civilian reliever airport and a port of entry from Mexico. It is sometimes staffed by the U.S. Customs Service, but only upon the request of incoming pilots to the Federal Aviation Administration.