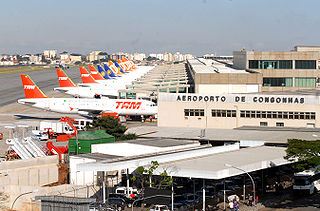 São Paulo/Congonhas Airport is one of the three commercial airports serving São Paulo, Brazil. The airport is named after the neighborhood where it is located, formerly called Vila Congonhas, property of the descendants of Lucas Antônio Monteiro de Barros (1767–1851), Viscount of Congonhas do Campo, first president of the Province of São Paulo after the independence of Brazil in 1822, during the Empire. In 2012 the airport was ranked 3rd in terms of transported passengers, 2nd in terms of aircraft operations, and 6th in terms of cargo handled in Brazil, placing it amongst the busiest airports in the country. Congonhas has slot restrictions operating with a maximum of 30 operations/hour, being one of the three airports with such restrictions in Brazil. The central hall of the passenger terminal is considered one of the most outstanding examples of modern architecture in São Paulo. However, modernizing and enlargement works conducted at the terminal from 2003 onwards, while trying to preserve the look of the older, historic section, still caused a loss of much of its former character.