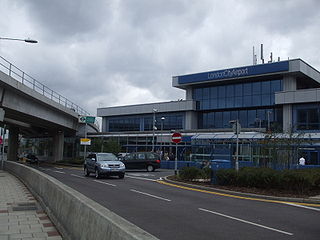 London City Airport is an airport in London. It is located on a former Docklands site (postcode E16 2PX) in the London Borough of Newham, some 6 NM (11 km; 6.9 mi) east of the City of London and a rather smaller distance east of Canary Wharf. These are the twin centres of London's financial industry, which is a major user of the airport. London City Airport has a single 1,500 metres (4,900 ft) long runway, and a CAA Public Use Aerodrome Licence (Number P728) that allows flights for the public transport of passengers or for flight training. Only multi-engine, fixed-wing aircraft with special aircraft and aircrew certification to fly 5.5 degree approaches are allowed to conduct operations at London City Airport. In 2012, London City Airport served over 3 million passengers, a 0.8% increase compared with 2011. It was the fifth busiest airport in terms of passengers and aircraft movements serving the London area after Heathrow, Gatwick, Stansted and Luton and the 15th busiest in the UK.