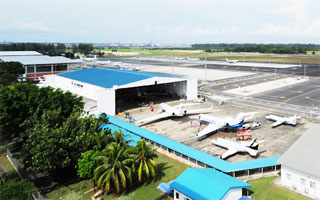 Seletar Airport is a civilian airport located at Seletar, in the northeastern region of Singapore, and is managed by the Changi Airport Group. Originally, the airport was completed in 1928 as a flying Royal Air Force station (RAF Seletar) and was also Singapore's first international airport. There had been a proposal to extend its runway to 2,000 metres (6,600 ft), so as to be able to receive the Boeing 737 used by many budget airlines. However, after considerations by the Singapore Government and the CAAS, they decided to build a Budget Terminal in Singapore Changi Airport instead.